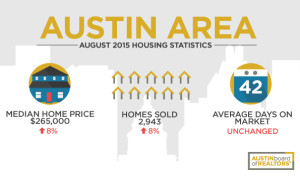 Austin Board of REALTORS® releases real estate statistics for August 2015

Barb Cooper, 2015 President of the Austin Board of REALTORS¬®, explained, “As Austin REALTORS®, we’ve seen our city expand in ways we never could have imagined, but household incomes have not been expanding at the same rate as the cost of living in Austin. We will continue working with our city’s leaders to find a solution to the complex affordability issues, with the end of goal of providing affordable and diverse housing stock for our growing population that aligns with the actual incomes of Central Texas residents.”

Recent data from the U.S. Bureau of Labor Statistics shows that approximately 65 percent of Austin-area professionals made less than $50,000 in 2014. Additionally, the City of Austin’s 2014 Comprehensive Housing Market Analysis cited that affordable housing costs should be less than 30 percent of gross monthly income.

Simultaneously, median home prices continue to rise and have increased by more than 30 percent from August 2010 to August 2015, a $65,000 difference over the last five years.

Cooper concluded, “This new report from the Bureau of Labor Statistics provides further evidence of the affordability issue in Central Texas. The growing disparity between rising home prices and what Austin residents can afford, combined with low inventory levels, will continue to drive residents outside of Austin’s city limits to buy a home, putting further strain on our region’s infrastructure and resources.”

The volume of townhouses and condominiums (condos) purchased in the Austin area in August 2015 was 305, a one percent increase from August 2014. The median price for condos was $225,500, which is five percent more than the same month of the prior year. These properties spent 37 days on market, or three more days than August 2014.

In August 2015, a total of 2,080 properties were leased in Austin, which is three percent more than August 2014. Properties spent an average of 36 days on the market, or four fewer days than in August 2014. Active property listings increased by eight percent compared to August 2014, reaching 1,986.