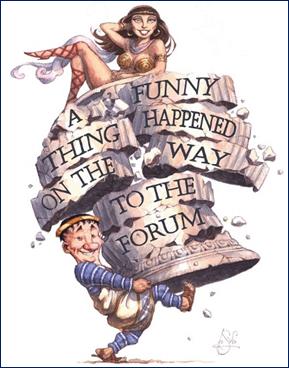 The City Theatre Company is thrilled to end its 2015 summer theatre season with Broadway’s most loved musical comedy A Funny Thing Happened on the Way to the Forum. With music and lyrics by Stephen Sondheim and a book by Burt Shevelove and Larry Gelbart, this hilarious, slapstick farce is regarded by many as a high point in the history of Broadway musicals. Be prepared to laugh early and often – as the signature show tune puts it, “Tragedy tomorrow, Comedy tonight!”

“An honest virgin! What a terrible combination!” – Pseudolus

A Funny Thing Happened on the Way to the Forum may be a 50 year-old musical based on 2000 year-old plays, but it remains a breath of fresh comic air, perfect for a summer evening! This joyous, musical romp through Rome has desperate lovers, scheming neighbors, and secrets behind every toga. Funny, fast-paced, witty, irreverent, it takes comedy back to its roots, combining situations from the time-tested humor of Roman theatre with the infectious energy of classic vaudeville. A non-stop laugh-fest in which Pseudolus, a crafty slave, struggles to win the hand of the beautiful but slow-witted courtesan Philia, for his young master, Hero, in exchange for freedom. But the road to romance is never smooth, as our crafty hero dodges a riotous succession of stunning surprises, cases of mistaken identity, zany characters, and a showgirl or two. Something for everyone!

“One doesn’t have a sense of humor. It has you.” – Larry Gelbart
And what a team assembled in creating this unforgettable musical. With music and lyrics by Stephen Sondheim, the legendary composer and lyricist with West Side Story, Gypsy, Company, Sweeney Todd, and Into the Woods being his most famous works, and a book by Burt Shevelove and Larry Gelbart, the award-winning writer of the film “Tootsie” and the “M*A*S*H” TV series. The musical’s original 1962 Broadway run won several Tony Awards, including Best Musical and Best Author. The show enjoyed several Broadway and West End revivals and was made into a successful film in 1966. A 1972 Broadway revival of the show won two Tony Awards. The musical was revived again on Broadway in 1996 staring comedy legend Nathan Lane and had great success, winning another Tony Award. Every actor who has opened in the role of Pseudolus on Broadway (Zero Mostel, Phil Silvers and Nathan Lane) won a Best Actor Award for their performance.

Brimming with the talents of an all-star creative team, the show is directed and choreographed by Missy Barnes, with assistant direction by Joe Falocco and musical direction by Clifford Bond. The City Theatre has assembled a phenomenal cast for the show including the dynamic R. Michael Clinkscales, Becky Musser, Richard B. Hall, Carl Gonzales, Jennifer Tucker, Bill Claussen, Jeff Phillips, Phoebe Moore, Hanne Haide, Emily Villarreal, Cherry Mendoza, Lariena Brown, Devin Adams, Gregory Driscoll, LeRoy Nienow, Adrienne Brown, Nicholas Gollihugh, and Creighton Moench. The City Theatre Company is an Austin-based, not-for-profit arts organization and is sponsored in part by the Austin Creative Alliance and the Austin Cultural Arts Division. Founded in 2006, the company has been recognized by the Austin Critics Table Awards, the B. Iden Payne Awards, the Central Texas Excellence in Theatre Awards, Austin Live Theatre, and has twice been voted “Best Theatre Company” by Austin American-Statesman’s Austin 360. CTC is dedicated in providing quality theatrical experiences and entertainment for Austin artists and its community and continues the commitment to making productions accessible for everyone. CTC offers its musical discount ticket program with $15 Thursday seats and $15 student seats for any show.