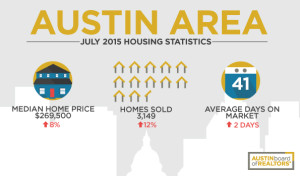 Austin Board of REALTORS® releases real estate statistics for July 2015

AUSTIN, Texas – August 20, 2015 – According to the Multiple Listing Service (MLS) report released today by the Austin Board of REALTORS® (ABoR), Austin-area home sales hit an all-time high, increasing 12 percent year-over-year to 3,149 sales for the month of July.

Barb Cooper, 2015 President of the Austin Board of REALTORS¬®, explained, “We’re in the midst of one of the most active summer selling seasons to-date, with more single-family home sales than ever before. Home prices remain high, but inventory levels have increased steadily throughout 2015, perhaps taking a step toward a more balanced housing market.”

According to the report, the median price for Austin-area single-family homes increased eight percent year-over-year to $269,500 in July 2015, while average price increased six percent to $338,452 during the same time frame.

In July 2015, less than 30 percent of single-family homes sold in Central Texas were priced below $200,000, outside of an affordable range for many Austin-area homebuyers. The majority of pending sales and active listings fall outside of Austin’s city limits in surrounding areas like Cedar Park, Leander, Hays County, Round Rock and Pflugerville, showing that Central Texas residents are continuing to prioritize affordability.

New listings increased nine percent to 4,133 listings and active listings increased by five percent year-over-year to 7,174 listings, driving inventory levels up to three months for the first time since July 2014. However, Austin-area housing inventory is still well below the 6.5 month level, which the Real Estate Center at Texas A&M University cites as a balanced market.

Pending sales rose eight percent year-over-year to 2,873 listings and homes remained on the market for an average of 41 days, or two days more than July 2014.

Cooper concluded, “Mayor Adler recently called for 100,000 new housing units to be built by 2025 as a first step to untangling the city of Austin’s complicated permit review process and alleviating affordability issues in Austin. The Austin Board of REALTORS® sees this initiative as progress toward a more sustainable Central Texas housing market and will continue to work with city leaders to make Austin an affordable place to call home for all residents.”

The volume of townhouses and condominiums (condos) purchased in the Austin area in July 2015 was 317, a four percent decrease from July 2014. The median price for condos was $224,850, which is 10 percent more than the same month of the prior year. When compared to July 2014, these properties spent 42 days on market, or five more days than July 2014.

The Austin Board of REALTORS® (ABoR) builds connections through the use of technology, education and advocacy to strengthen the careers of its 11,000 members and improve the lives of Central Texas families. We empower Austin REALTORS® to connect their clients to the region’s most complete, accurate and up-to-date listings data. For more, contact the ABoR Department of Public Affairs at

marketing@abor.com or 512-454-7636. For the latest local housing market listings, visit AustinHomeSearch.com.
* The inventory of homes for a market can be measured in months, which is defined as the number of active listings divided by the average sales per month of the prior 12 months. The Real Estate Center at Texas A&M University cites that 6.5 months of inventory represents a market in which supply and demand for homes is balanced.