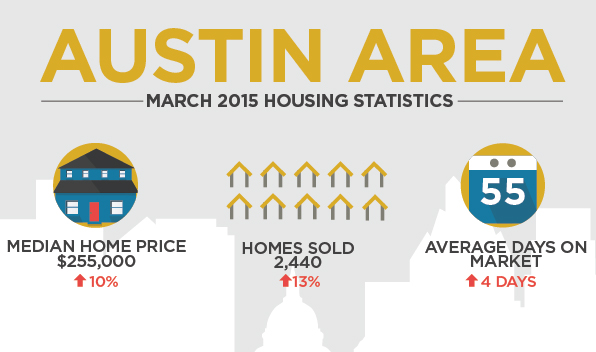 Austin Board of REALTORS® releases real estate statistics for March 2015

AUSTIN, Texas – April 21, 2015 – Austin-area single-family home prices hit an all-time high, while single-family home sales volume set a record for the month of March according to the March 2015 Multiple Listing Service (MLS) report released today by the Austin Board of REALTORS®.

Barb Cooper, 2015 President of the Austin Board of REALTORS¬®, explained, “The Austin-area housing market is the least affordable it has ever been. Solving Austin’s affordability issues is not only dependent upon generating new, affordably-priced housing stock, but also preserving and maintaining Austin’s existing housing stock. The recent Zucker Report is yet another indicator that Austin’s city leadership needs to take significant steps to ensure that all of Austin’s residents live in safe, code-compliant homes and are able to quickly and easily make improvements to those homes.”

According to the report, the median price for Austin-area single-family homes increased 10 percent year-over-year to $255,000 in March 2015, while average price increased 13 percent to $334,758 during the same time frame. This is the highest Austin-area home prices have ever been. Only three in ten single-family homes sold in the Austin area in March 2015 were priced less than $200,000.

Single-family home sales increased 13 percent year-over-year to 2,440 home sales in March 2015, a new record for March single-family home sales volume. In March, more than half of the homes sold in the Austin area were outside of Austin’s city limits, with a majority of sales occurring in Round Rock, Pflugerville, Georgetown, the Cedar Park/Leander area and the Kyle/Buda area.

Austin-area monthly housing inventory was statistically unchanged from March 2014 at 2.2 months, a figure still well below the 6.5 month level the Real Estate Center at Texas A&M University estimates as a balanced housing market. Homes continued to spend more time on the market in March 2015, increasing four days year-over-year to an average of 55 days.

Cooper concluded, “It’s encouraging to see how seriously Austin’s City Council is taking the findings of the Zucker Report. Now that Mayor Adler and Austin’s new City Council members are past their first 100 days in office, the Austin Board of REALTORS® expects quick and decisive action on policies that will put a stop to Austin’s growing housing affordability issues. We’re looking forward to working with city leaders on finding these solutions.”

The volume of townhouses and condominiums (condos) purchased in the Austin area in March 2015 was 263, a three percent decrease from March 2014. The median price for condos was $226,500, which is one percent more than the same month of the prior year. When compared to March 2014, these properties spent 10 fewer days on the market, or an average of 43 days.

The Austin Board of REALTORS® (ABoR) builds connections through the use of technology, education and advocacy to strengthen the careers of its 11,000 members and improve the lives of Central Texas families. We empower Austin REALTORS® to connect their clients to the region’s most complete, accurate and up-to-date listings data. For more, contact the ABoR Department of Public Affairs at marketing@abor.com or 512-454-7636. For the latest local housing market listings, visit AustinHomeSearch.com.

* The inventory of homes for a market can be measured in months, which is defined as the number of active listings divided by the average sales per month of the prior 12 months. The Real Estate Center at Texas A&M University cites that 6.5 months of inventory represents a market in which supply and demand for homes is balanced.