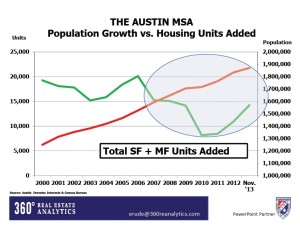 After attending a series of panels and seminars focused on the economic forecast for the Austin metro area, it appears 2014 is shaping up to be more of the same. With every major stat tracking toward the positive other than inventory, it feels as if there’s “nothing much new here” to report. Still, let’s try!
TRENDS

2013 finally brought a gentle rise in interest rates, something we’ve all been warned about for years. As the Fed just began tapering debt purchases within the past couple of weeks, it seems we’ve already seen the largest jump in interest rates. Though we will see continued increases in interest rates, often forecasted between 4.75-5.5% throughout the year, and considering rates first dipped into the upper fives in 2003, historically speaking, mortgages are still cheap and likely will be for some time.

Surely it’s no surprise that home values are also up. With only two of ABOR’s MLS areas not reporting positive changes in the median sold price, the Austin Board of Realtors also reported a 9.6% increase in the median as well as a 7.6% increase in the average prices for the entire MLS area. Those numbers, for the entire MLS area, ranging from northern Williamson County south through Hays County and including Bastrop and Caldwell counties, are $219k for the median and $284k for the average.

Supply continues to be historically low. A quick glance at the graph above shows one of the major obstacles local home buyers and Realtors alike face. The red line represents population growth while the green represents total “new” units added for the calendar year. If (on average) every 2.5 residents need one home and our population continues to grow at over 60,000 residents per year, it’s safe to assume we need roughly 26,000 new units per year. While 2013 seemed to present favorable numbers of new units (10,000 new houses and 12,000 new apartments), 2014 is staring at roughly 7,000 finished & build-able lots, leaving us significantly shy once again. Add that housing supply deficit to those of the past few years (specifically, 2011 had around 7,600 combined units added and 2012 had 13,000), and it’s clear the housing shortage is here for quite some time. When we say there’s “not much new here”, we really mean it
CONCERNS
The growing population presents two major issues that will once again be the focus of local politicians and advocates alike. Traffic concerns were a top story of 2013 highlighted by the breaking ground of the Mopac expansion. But can we really expect one lane in a secondary artery to offer the relief necessary to support the population explosion? Consider the issues with the traffic, the availability and distribution of water to Central Texas might be a bigger long term concern. We’ll be tracking both of these stories closely over the next few years.
LET’S DO THIS
Continued low interest rates coupled with both an increase in household wealth and stronger house values, suggests that 2014 could be the year of the move-up. If you are looking to move up in the Austin metro area, or if the rates and prospects motivate you to get into the game as a home owner, get with me as soon as you can and let’s build the plan for you.